So during Memorial Day weekend this year, I decide to do some cleaning and rearranging of stuff in my attic. And one thing I decided to do was put down some underlayment paper on top of the plank boards which compose the attic floor. And then I heard a ding. No, it wasn’t the doorbell but the light bulb going off over my head and I said to myself, “Self?” and I said “Yes?” and I said, “Do we dare attempt to set up the Lionel trains in the attic like they were 10 years ago?” and I said “Why not!!”

Next thing you know I am looking thru the boxes that I had my old Lionel trains in. As I went thru them, I remembered back to the times before and after my divorce when I was setting them up in the attic and my kids were watching me. After the divorce, I needed something to keep me busy and I built a double track main line thru the attic and it was quite the layout. But then I got busy with my HO scale layout in my basement and the attic layout became an afterthought.

I can remember pulling up the track and a lot of the track had collected rust over time. I still remember the day I went to the town dump and threw the old rusty track into an empty recycled metals dumpster. Fast forward to the beginning of June and I was looking for Lionel O Gauge track instead of the 027 scale track which was too expensive as used and hard to find. So between eBay and some hobby stores, I found the track and switches that I needed. 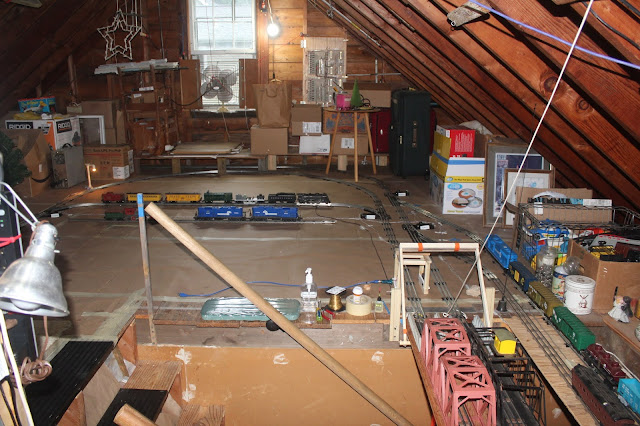 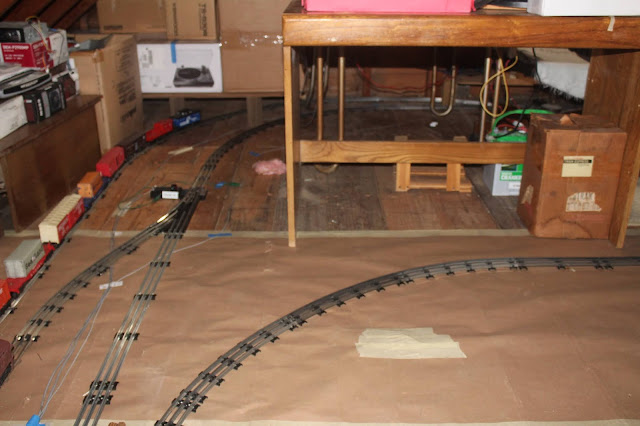 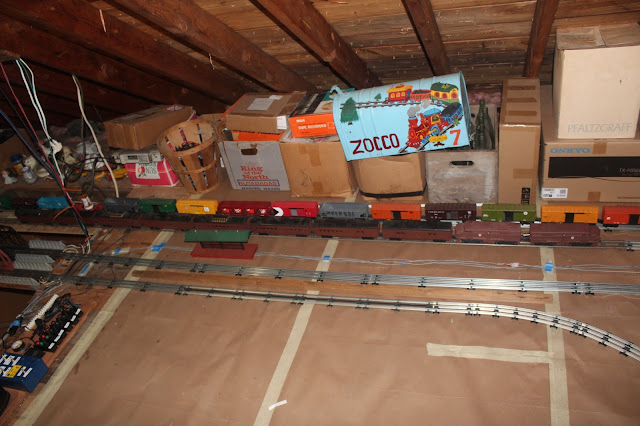 Plus I bought a brand new Lionel diesel locomotive called the SD-60M in Conrail livery. This beast is heavy in that it has two Pullmor motors, one for each wheel assembly and it has Magne-Traction so it really grips the rails. And it has RailSounds which has a horn and bell like a real Amtrak locomotive.

It took about 3 weeks to get the tracks down and another week just to inspect and clean all of the wheels on each car and add a drop of Labelle #102 light weight oil to each axle bushing. And it took a couple of days to align the tracks with the drawbridges that go across the attic stairway. The track on the bridge was the old 027 track and it would have been a pain in the alpha-sierra-sierra to replace that track. But I was able to get the track to line up and get the old power wires soldered onto the new track.

After the track came the wiring for the turnouts and the grade crossing consisting of a wig-wag signal, 2 crossing gates and a watchman shack. And then came the electronics to operate the crossing accessories. The PVC structures radiate light over photocells in-between the tracks. When a track hits the first photo sensor, a Circuitron DT-3 board turns the accessories on and when the last car passes another photo sensor, the gates go up. The control panel consists of an old American Flyer transformer to power the grade crossing and a Lionel KW transformer runs the trains and provides power to the photo sensor lights. The 736 steam locomotive end its Pennsylvania tender date back to Christmas 1964 when my brothers got the train set along with The General of Civil War fame. Other Pennsylvania has a pair of K-Line FA-1 A-units pulling an 8 car passenger train. The Conrail SD-60M pulls 25 freight cars and cabooses dating from 1964 to the mid 1990’s. The track is configured as a single track with the Conrail freight train running in one direction and the Pennsylvania passenger train running in the other direction. And there is a track cleaning g train to keep the track looking shiny. SO that’s the attic layout. It does get a little warm but there are plenty of fans to get fresh air into the attic. Come winter time, the trains will be packed up and the track coated with a thin sheen of oil to keep them from rusting until spring comes around. Anyway, enjoy.

Phil Zocco
I am located in Niantic, CT USA. I am a retired television broadcast engineer from WTNH-TV in New Haven, CT. My hobbies are Amateur Radio (N1BOW is my callsign), SKYWARN, IRLP, model railroading, and railfanning. See you later down the rails.